Why Quiet Quitting is a Term You Need to Know

The Growing your Team Podcast: Episode 142

What is quiet quitting? The term might be trending lately, but the action is nothing new. It has been going on within businesses forever.

Learn what quiet quitting is, what you can do to prevent it within your own business, and what actions you should take when it does happen. In addition, learn why the employees might be right when they decide to quiet quit.

This podcast episode transcription might be edited for clarity and conciseness.

Hello, Jamie Van Cuyk here, and welcome back to the Growing Your Team podcast.

I feel like it’s been forever since I recorded an episode for the podcast. I guess it has been because every episode that’s gone live over the last two months I recorded in May or earlier. It was so nice this summer to know that I had been proactive and took one thing off my plate when I was trying to travel and enjoy some extra time with family while the kids were out of school.

And I encourage you to do the same.

Look ahead in your schedule and when you have slow times, down times, see what you can do so you can get ahead.

So today I want to talk about something that is a very trendy topic recently. I’ve seen articles and social media posts about this topic pretty frequently over the last few weeks, and you might have too.

Today I’m going to tell you what quiet quitting is, what you can do about it as a business owner, and my opinion on the subject.

To start off, I’m going to tell you a little bit about my opinion.

And that is, I think the employees who are quiet quitting are actually doing something right.

I know, I know. If you know what the term is, or as we go through this episode and you learn more about it, you might be like, “What?” But, I’ll explain why I think that. And it might not be 100% of the time that these people are right, but at least 95% of the time, in my opinion, these people have it right. And of course, I’ll explain why. That way, you make sure you’re taking the right steps as a business owner when you see this happening within your own business with your own team members.

To start off, what is quiet quitting?

It is when an employee who is typically a high achiever and goes above and beyond decides they’re not doing that anymore. They’re going to stay with the job because maybe the paycheck’s nice or the commute’s good, the hours are good. There are things that are good about the job. They don’t want to leave completely, but they’re kind of fed up.

So, they start doing what is called the bare minimum for them to keep their job. They’re no longer going to go above and beyond and do more than what they are required to do.

Because as business owners, isn’t that what we want?

We want a team member who’s going to go above and beyond and make us really, really happy to give them a paycheck. That sounds amazing! Get more out of a team member than you initially thought was possible.

In most cases, those team members are not getting compensated or even not getting recognized for that above and beyond work.

What is in the job description? And if that’s the job they’re getting compensated for, then there’s nothing wrong with them just doing that work and not putting in more effort; not doing work that is outside their job description just because that’s the type of employee they always were.

And that’s why I think that at least 95% of the time, these employees have it right.

Why should someone be expected to always go above and beyond? Why do we expect people to do more than what we are willing to pay them to do?

We create positions because that is the position that we need filled within our business. And if a team member is achieving those action items, achieving the goals and the expectations that we set out for that role when we hired for that role, then that should be okay.

She had some of these team members that were Rockstar employees, and she was trying to figure out what she could do to get everybody to that level. She was thinking about letting these team members go because, as she put it, were doing the bare minimum for the job.

Through a conversation, I helped her realize that the bare minimum is what they were hired to do. If that is not okay, then she needed to re-evaluate what that bare minimum is.

When you hire someone to do X, you shouldn’t be upset that they don’t perform Y, because you hired them for X. Yes, you might have some team members that come in and do Y and do Z. But the ones that come in and just do X because that is the job they were hired for are doing exactly what they were hired to do. They are doing exactly what is needed to keep their job and earn a paycheck.

So, we can’t get mad at team members because they don’t go above and beyond.

My advice to you is whether you’re seeing quiet quitting going on, whether you’re noticing a change in a team members performance or not, you need to ask yourself, “What is the bare minimum for this job?”

If you compare their performance against the job description for when they were hired, are they meeting expectations?

And if the answer is yes, you have two choices.

One, you can say, okay, they’re doing the job that they were supposed to do. It’s okay that they don’t go above and beyond because they’re meeting expectations.”

And guess what? If the role has changed to where now you expect the team member to do more, you’re probably going to have to pay that team member more.

It is an elevated role. It is a role that has more responsibility. And if that is the case, you can’t expect someone to be happy to take on new responsibilities, to take on new things in their job, and you to sit there and say, “Okay, but I’m going to pay you the same.”

If you need to elevate a role, do it. But elevated roles typically come with higher compensation.

So, if the bare minimum of today no longer fits your business, then you need to adjust the role to fit your new expectations and adjusted roles, elevated roles, typically come with higher compensation.

And that’s why a lot of these people are quiet quitting.

They recognize that they are not being compensated for the work that they do.

It could be that they’re doing the work of director-level work, but they have a manager title, and they’re getting told they cannot get promoted because there is no director opening. They don’t have a spot on the team for the title, but they expect someone to do the work – and that happened to me years ago.

If you’re not willing to meet them where they are with the work, they have every right to just do the work that they are hired to do.

So you have a choice.

Be okay with them quiet quitting as long as they’re still meeting the expectations from when you put them into that position or change the position and compensation to match what you currently need.

Quiet quitting is nothing new. The term might be trendy, and it might be your first time hearing it, but employees have been doing it for a long time.

They are saying I am only going to do what I need to do unless I get respect.

As business owners, you have options.

Quiet quitting might turn into actual quitting, and you’ll lose that team member completely. You’ll have to hire and train to replace them, and if that new team member doesn’t feel appreciated there’s just going to be this never-ending cycle of potential rock stars on your team getting fed up and leaving.

So, create a culture where people don’t want to quiet quit.

Be known as an employer who recognizes hard work and compensates their team members appropriately.

Because once again, you can’t get mad because a team member does the job that you hired them to do.

And if you want more, don’t just ask more from your employees if you’re not going to give them more.

Ep81 – Stop Resenting Your Employees Who Quit. Here’s Why

Ep106 – You’re Turning Into the Boss You Hate

Ep122 – Are You Holding on to Employees Who are Not Worth Their Paycheck? 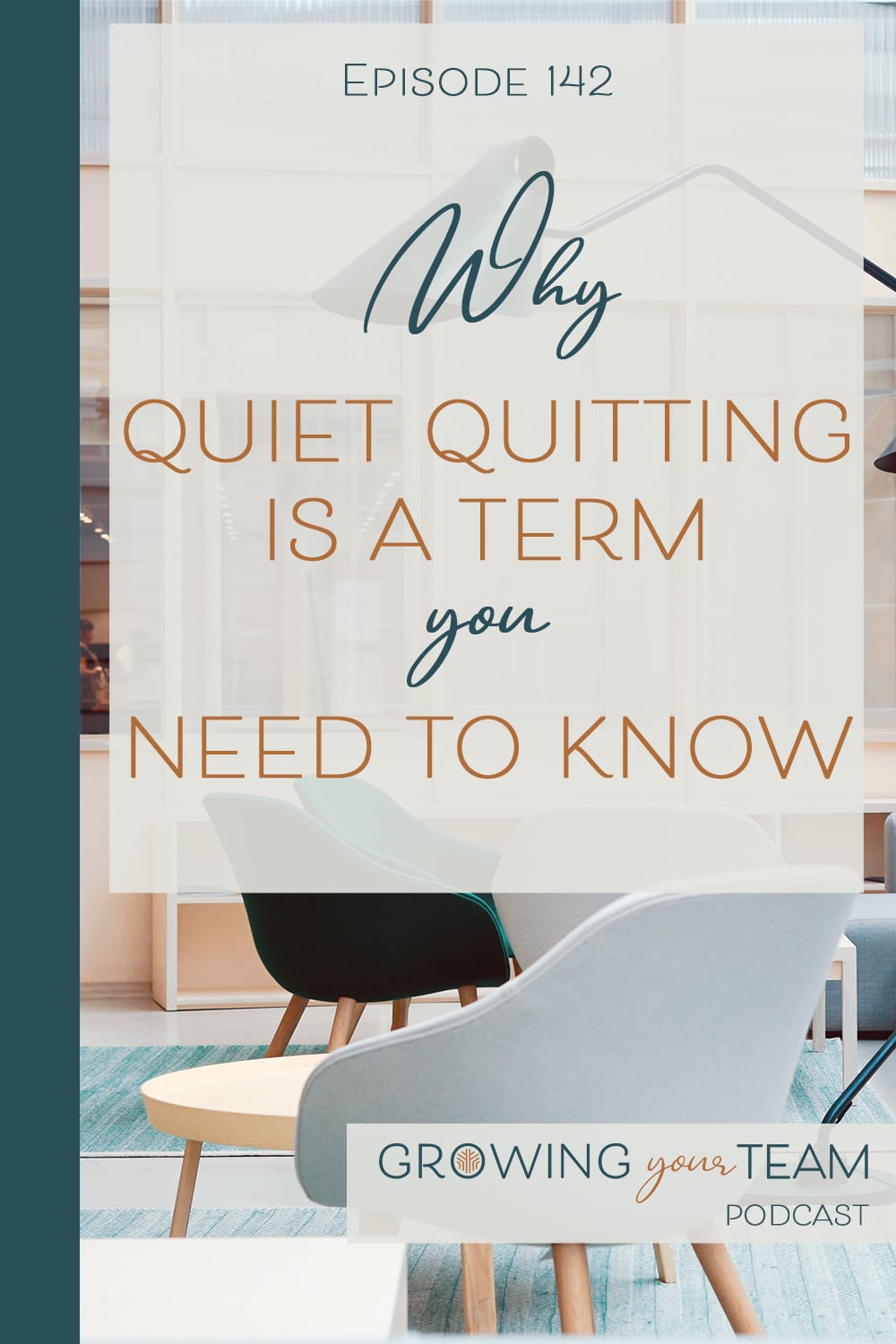