The Growing your Team Podcast: Episode 144

Are you quiet firing your employees? Quiet firing is when you don’t actively exit a team member from your organization, but you start taking subtle actions that make the employee want to leave your team.

As a business owner, you shouldn’t do it. While it might lead to the team member leaving, it can create a lot of long-term damage for your business. Learn why and what to do instead.

Are you feeling overwhelmed by the pressure of choosing the right hire?

Are you tolerating a bad hire because you fear trying – and failing – again?

At Growing Your Team® we empower women entrepreneurs and leaders to expand their unique businesses by teaching them to master the hiring process. Schedule your free Jump-Start Consultation today.

Hello, Jamie Van Cuyk here, and welcome back to the Growing Your Team podcast.

As we talked about two weeks ago with the episode on quiet quitting, episode 142, quiet quitting is when a team member decides they’re done going above and beyond, they’re only going to do the bare minimum of what is required for them to keep their job. And as we talked about it, that really shouldn’t be a big deal for you because you hired them to do a job. You’re paying them to do a job, and if that’s the job that they’re doing, great.

We can’t get mad at our employees because they’re not always going above and beyond. If what you need is above the position that they’re doing, then you need to elevate the position. That typically comes with a raise or possibly even finding a new team member who can do the higher-level position that you really need. But as long as an employee is doing their job, you should be happy.

So, what is quiet firing? Quiet firing is when you, as a business owner or a people manager, decide that you no longer want someone on your team, but you’re not going to really do the work to actively exit them from the organization. Instead, you’re going to passively take actions that make that employee want to leave on their own.

This could be not giving the employee raises, not promoting them when new positions become available that are higher, or doing other actions that make it so the employee just really doesn’t feel like they’re valued in the workplace.

And this is a horrible thing to do.

Let’s break it down a little bit to really stress why it is so bad to quiet fire someone in your organization.

The first thing is, as I said, you’re doing things to make the employee not feel valued. And what happens when people don’t feel valued? They start to have feelings of resentment.

You don’t care about them as an employee, so they’re going to stop caring about you as a boss and company.

They might bad-mouth you to their friends and family. And not really in a malicious way, but bad-mouthing of, “I can’t believe this is going on to me.” They start sharing their personal experience.

They could, intentionally or unintentionally, take it out on your customers if they’re no longer feeling valued, and work turns into a place of stress where they don’t want to be. Your customers can often feel that, as we talked about a few weeks ago on the episode with John Howard, when you take care of your team members, they take care of your customers really well. That feeling of feeling valued and feeling special goes through your team members to your own customer. That customer feels it the same thing when you don’t value your team members; it pushes through to the end customer.

That’s the biggest thing. It is a horrible thing to make someone not feel valued because your business is going to suffer as they tell people about their experience.

The other reason why quiet firing is something you shouldn’t do is that we need to be brave.

As business owners, we need to recognize when something is not right in our business and take actual action to correct it.

This could be letting a team member go if they are not working out well in their position because they’re not the right fit. Or, it could be, having conversations because something just isn’t going well.

As I shared in the last episode, episode 143, I recently had to let go of a team member. This was due to the fact that the position I hired her for was no longer fitting in my business.

It had nothing to do with her; it was that the position I hired her for wasn’t going to really be available at the same level moving forward.

She decided that she was not going to take the other position, and we planned her exit from the organization.

It’s about being brave enough to have conversations and saying, “hey, here’s what’s going on now.”

The example was about a position changing and nothing about the employee themselves. But sometimes, it is about the employee, and I want to give you an example of a conversation that I had with one of my very early team members back in corporate.

I had a team member on my team that wasn’t performing very well. We were getting a lot of feedback from the other internal counterparts that she worked with, which led to a lot of conversations with the employee. Through those conversations, we focused on some output issues and got her to a point where she was doing the job well.

One thing I noticed is the team member was always coming in late. Most of the team arrived by 9 am, and she wasn’t arriving until closer to 9:30. We talked about how this was unacceptable because I never knew if she was coming in or if I needed to find a backup for her accounts. I learned that sometimes it was hard for her to get there by 9, so we ended up changing her standard hours to coming in at 9:30. My goal was to reduce her morning stress and make her feel that I valued her instead of stressing about her start time.

After that change, things seemed to be going well at first. We saw a little bit of a difference, but then things started slipping again. So, we had another conversation. Once again, this person was able to reach the final output. It was just getting there, and the relationships along the way were not really flowing as needed.

During this next conversation, I asked, “What else can we change so you feel better about the position? What can we adjust?”

We talked for a bit, and she told me a few items. Unfortunately, I had to tell her that I couldn’t make those changes because those items were a part of the job. It was the core of the job description.

For example, she mentioned that she did not like doing the reporting. Doing the reporting work drained her, so she didn’t feel like interacting or having relationships with her counterparts.

My response was, “I hate to say it, but that’s the part of the job. I can’t take that part away because that work needs to get done. That’s part of the output that we hired you for.”

Then, as we’re sitting there in this conversation, it was like one of those times when it’s kind of like word vomit coming out of your mouth, and then you’re like, “Oh my God, did I really just say that?”

What I said to this team member was, “Then maybe this isn’t the right job for you.”

And I sat there, I was like, Oh my God, did I really just say that? I can’t believe I just said that. Can I rewind time? Did I really just tell my employee that maybe they should quit?

But that’s exactly what I did.

I was so nervous that I was going to get in trouble for telling my employee to quit and get in trouble with upper management, or even possibly getting in trouble like with that person themselves. Who wants to be told, well, maybe this isn’t the job for you? Pretty much implying that maybe you should exit this position.

A few days later, she pulled me aside into a meeting room and said, “You’re right. This isn’t the job for me, and I’m turning in my notice.”

One thing that she told me at that point in time was that it was the most honest conversation she had ever had with a manager, and she thanked me.

I’m sure that’s true. Managers, leaders, and business owners are too afraid to say what needs to get said. As a result, we keep people in these positions that aren’t working out well, and we quietly fire them instead of letting people make the decision that is needed so both sides can be happy.

A few years later, I was out taking a walk around the business complex where this company was, and I ran into this old team member. She stopped me and said, “I want to once again thank you for that conversation. I needed that push. I needed that wake-up call to say this is not the right job for me, and I am happy now.”

Sometimes we think so short-sighted with our team members.

No one is going to be happy if you’re quietly firing a team member. That team member is probably going to hold on way longer than you really want them to, and then that team member is also going to start resenting your company. You might take what was once a positive working relationship and turn it into something that is negative.

We want to build a place where people want to work.

We want to build an office or a small business or shop or whatever it is where people say, “You know what? It ended up not being the right job for me, but I would go back there in a heartbeat if the right position was available, and I would recommend that business to my friends and family.

“And the boss? They cared about me even when I was no longer the right fit.”

00:16:36 Give your employees the permission they want

If they are no longer the right fit for whatever reason, because the position needs to change or because they’re just no longer right for your organization, even though the position is staying the same, talk to them.

You’d be surprised how many people are looking for permission to go and do something else.

This is something that recently, with the great resignation and everything, people took COVID as that permission they were looking for to go find and do something else.

Be open, honest, and transparent with your employees, even when it’s not fun conversations to have, because everything will work out, in the long run, better than quietly firing your team members.

Ep142 – Why Quiet Quitting is a Term You Need to Know 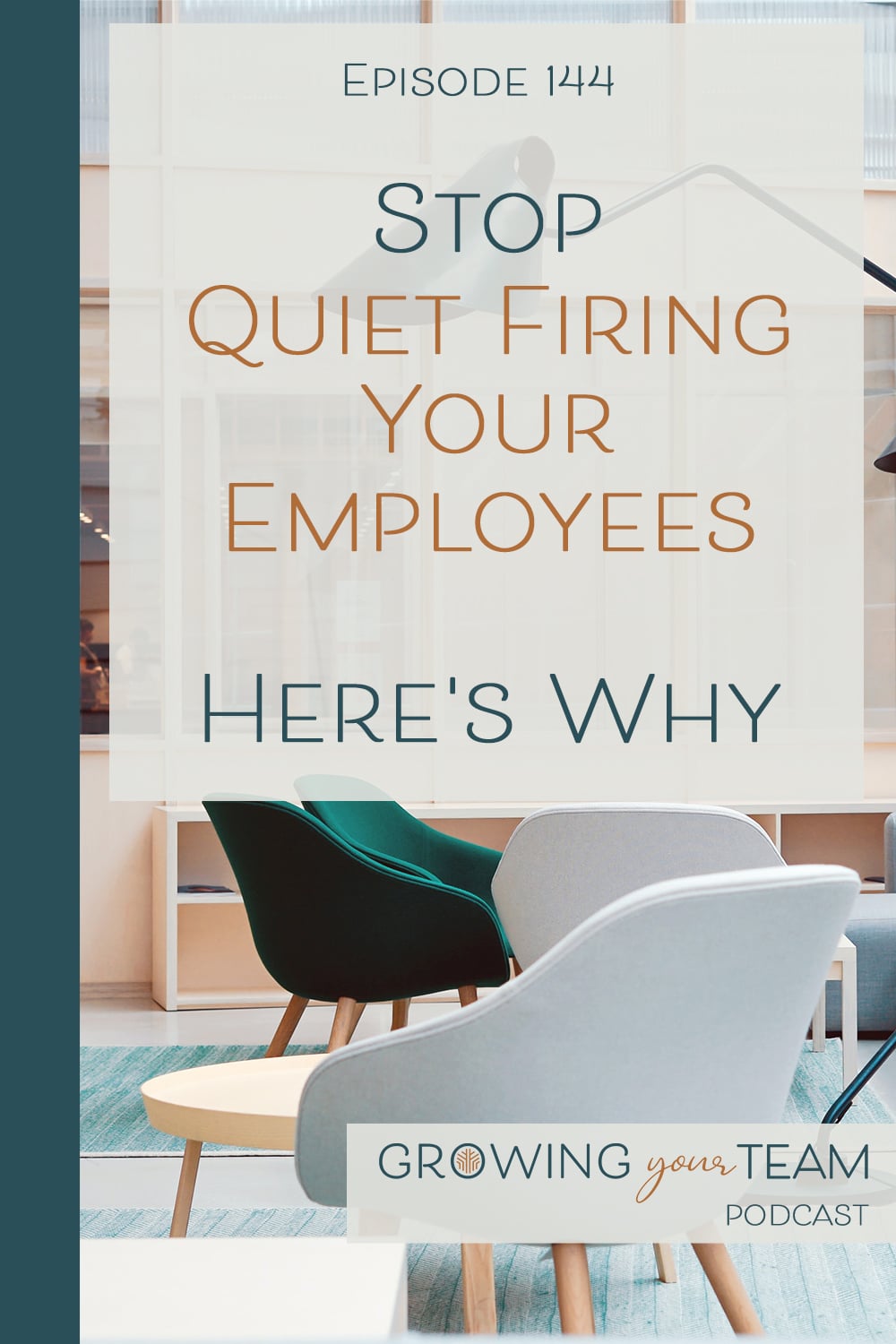